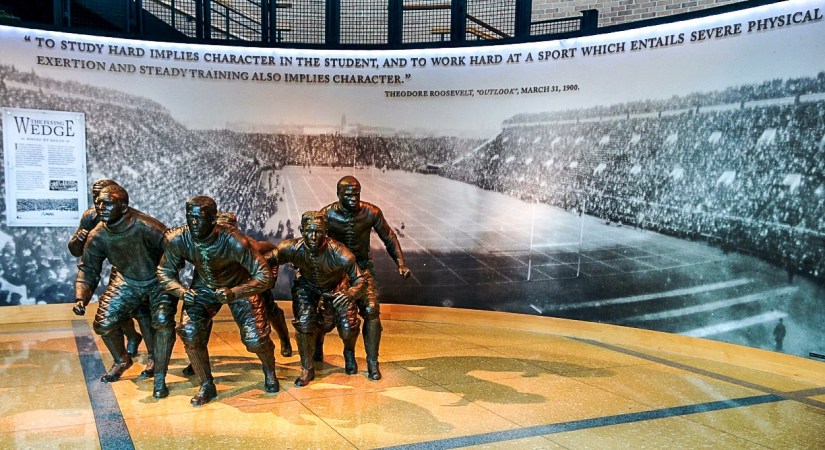 We may be biased at Playeasy, but we could not agree more with this quote. With four of our team members being former student-athletes, we believe our participation in college sports helped us develop into the people, and leaders, we are today. Without the work ethic, resilience, leadership, determination, and teamwork that was instilled in us in our time as student-athletes, we would have never been able to start Playeasy. It's something we talk about often, and why it has been incredible being in the Techstars program that is supported by the NCAA.

We had the opportunity to check out the NCAA Headquarters, as well as the NCAA The Hall of Champions. Located in downtown Indianapolis, the museum is dedicated to providing a greater understanding of the NCAA, including its membership of more than 1,000 colleges and universities and over 500,000 student-athletes.

The NCAA was initially started because of the dangerous and barbaric tactics of early football. More specifically, "The Flying Wedge," a play where the entire offensive side of the ball would clump together and drive the ball through the defensive in a… a wedge. This along with other practices, mass tackles and pileups, led to many injuries and deaths - you read that right, deaths! So, the President of the United States at the time, Theodore Roosevelt, called two conferences in the White House with college athletic leaders in the year 1905. These meetings initiated changes in the rule set of football. After more rules and regulations were established, the earliest form of the NCAA was created in 2006. It was called the Intercollegiate Athletic Association of the United States, the IAAUS, but then updated it to the current anagram in 1910 after more institutions and rules were added.

The NCAA originally established its national headquarters in Kansas City, Missouri in 1952. The organization announced its intentions to move in 1996 and whittled down the field to four different locations in Indianapolis, Dallas, Denver, and a different location in Kansas City. The draw of the budding capital of the crossroads state, close proximity to the airport, and the RCA dome were too good to pass up. The NCAA officially moved into its downtown Indianapolis offices on July 27th, 1999.